2021 was already proving to be a year like none other in retail when I received an email from a TV production company asking me if I would be interested in Casa Fina taking part in a prime time BBC1 interior design show – Interior Design Masters. As a complete fan of series 1 & 2, the contestants, host Alan Carr and the judge Michelle Ogundehin I leapt at the chance to find out more.

We were visited by producers, design advisors and logistics as the team worked out which 3 Salisbury independents would work well together to offer contrasting challenges. Every measurement was written down, plans were drawn and the shop was photographed from all angles, inside and out. After a week or two I heard back that they had chosen Casa Fina and we started to think about the task ahead. 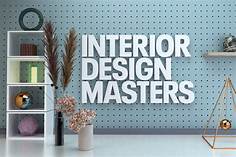 Casa Fina has been on Salisbury’s High Street for 38 years since my mother and I opened the shop in 1983. Over the years the stock has changed dramatically and we have had mini revamps, the last in 2015 but some things remained like the ugly and inefficient lighting and the fretwork screen that we have always used as a backdrop to our window. The design brief talked about updating our look while keeping the essence of what CF is all about. Streamlining our till area was a must as it was messy and disorganised and I wanted to highlight our lamps and shades as they are such an important part of what we sell.

On a beautifully hot summer’s day I drove down to Brighton to meet the designers with whom I would be trusting my business. It  was lovely to meet up with Annie from Just Jane and Helen and Vicky from Brides by Victoria, Annie’s daughter Carys was there too so it was a great girls’ gathering. We watched the filming of Alan’s introduction and the contestants were then allocated to the shops. I was filmed meeting Fran and Dean as they pitched their ideas to me. Dean went first – he suggested painting blocks of bright colour on the walls and floor for a more contemporary look. Fran’s pitch was very detailed, using Farrow & Ball tones and referencing the shop’s history and story. She must have looked at every social media post, newsletter and blog as she knew our history so well.

I chose Fran to be the lead designer but I’d really liked Dean’s attention to the lighting in the shop and his retail experience meant that he would be vital when it came to remembering that we were a business that needed practicalities – I felt like I’d landed a dream team. 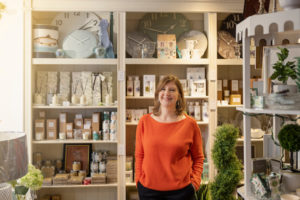 On Sunday July 18th the CF team gathered to pack away around 30% of the stock. I am blessed with a wonderful staff and they cracked it – leaving me to re-merchandise so that the shop looked full enough for filming the ‘before’ shots the next day. Monday was tough where the stress might well have overtaken the excitement as the remainder of the stock had to be packed away – every glass and mug and all the furniture – the shop hadn’t been this empty since 1983.

Lying awake that night I really wondered if I’d been wise. Several other indie business owners said that they just couldn’t have taken that leap to trust someone they didn’t know with their livelihood. I kept telling myself that the production company had undertaken to put everything back as it was if it really didn’t work but of course the hope was that it would. A five minute chat with Fran and Dean in the morning made me feel so much better. I was worried that there wouldn’t be enough display space (I’d seen a lot of the furniture marked to not be returned) but they took that all on board and I was reassured.

I’m quite good at compartmentalising (a really useful technique to deal with stress) and so I had friends to lunch and sat in the garden on one of the hottest days of the year while the TV team worked long hours in the High Street. On the Wednesday I kept myself busy – settling down to paperwork and online meetings. Thursday morning went on for ever! I was due to go in after lunch to view the makeover and just couldn’t settle – was this a new era for Casa Fina or the beginning of an un-makeover?

Of course I was filmed walking back into the shop and they must have just caught my open mouth – I LOVED IT. [They filmed me walking in open mouthed, getting teary over some of Fran’s touches then ….. asked me to do it all again! My acting skills didn’t do it justice] 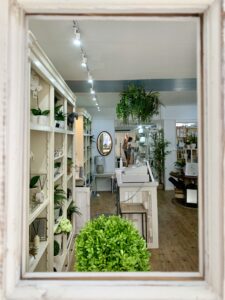 Fran and Dean had worked SO hard through that heat (the entire production crew who were on site were amazing). The front of the shop was transformed with seating for passers by or ‘bored husbands’. There was new signage too – I did feel rather embarrassed that I hadn’t updated it myself after a change of logo. Inside, the shop just felt light and airy and calm. The display shelves had been merchandised to reflect my style, so it felt like home, but the counter area had been completely transformed with a feature made of all our fabulous faux plants. The screen was no longer in the window but had been suspended which immediately gave me display ideas and the window area was changed from a room setting style to a more modern display. 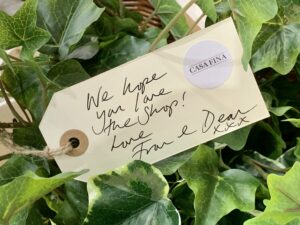 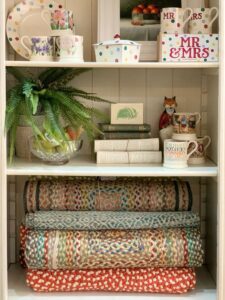 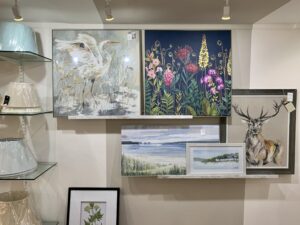 It didn’t stop there. An old door that I’d spotted before I left had been transformed into a jewellery display, a blocked up doorway was filled with crates to display our home fragrance and bath & body lines. In the second room there were clever shelves for our pictures and space for our lamps and shades. A table had been created for use either as a display space or for discussing shade choices with customers. It could also double as a workshop area or somewhere for me to sit to get on with emails.

The third room in the shop was left so that the 3 shops were comparable in size – we had a stock room again after 35 years! This area would be vital in keeping the calm, uncluttered atmosphere. Instead of putting out every item that arrived, we could now just put out one or two, storing the rest for replenishment.

It was wonderful to see the faces of the staff as they saw the shop for the first time. Anne was rendered speechless, Esme teared up, Chris is our guardian of the new look – making sure that we (I) don’t slip back into our untidy ways and Jackie loved it so much she said she might come out of retirement. (She did!) Customers have been so complimentary about our new look with one or two kindly saying that they hadn’t thought it could be improved. A few people missed the clutter and the ‘search’ but we know that clutter and hidden products aren’t the greatest sales technique. The biggest test however, wouldn’t be the vox pops but the sales figures – could we still achieve similar figures with 25% less floor space?

What we found was that we were selling more lamps and more pictures because they had been given prominence in the new layout. Items such as our fabulous tin waste paper bins flew out and the display shelves behind the window started to be a good location for sales after years of customers bypassing that corner – well done Fran and Dean! 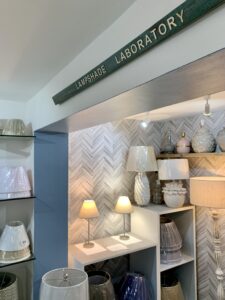 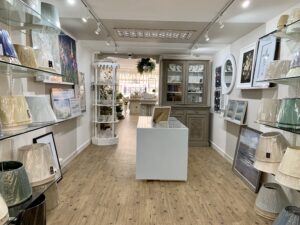 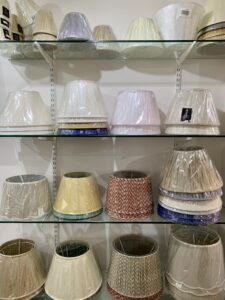 The next worry was Christmas. For 38 years we have worked on our Christmas window display on the Sunday that the clocks change. Each year it has been a challenge to come up with a different theme and a more eye catching display. This year the decorations and many of the gifts were ordered in January and February and, of course, were ordered with a completely different space in mind. The advantage of the new display was that we were able to dress the entire shop for Christmas in one go – the impact when we opened on the Monday morning was therefore far greater. If I’m honest, I didn’t feel that the Christmas display was my best but having said that we did sell lots and lots from the window. I have however already bought stock and planned the window for this year which will be our 40th Christmas window and has to be special – this time I could order things specifically for the space and it will be fabulous. 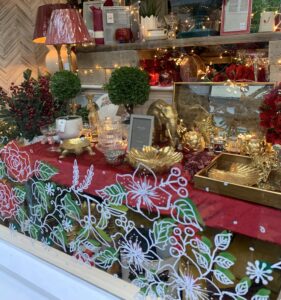 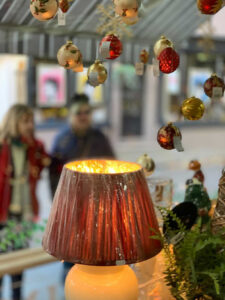 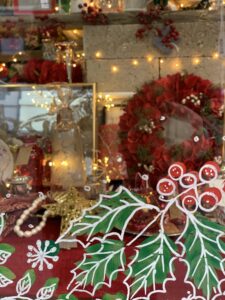 Waiting for the show to air was a drag, we couldn’t publicise the programme but of course word got out locally after Alan Carr posted on Instagram from the Cathedral Close and stopped for selfies in the street. Now that it has been on TV it’s certainly a relief that we can all talk about the experience.

I loved watching the show but felt that the editing didn’t do Fran and Dean any favours. There were lots of touches and ideas that the viewer didn’t see and Fran had worked so hard on those. The brief was continuity through the shop and flexibility for display and we have that abundantly. Fran mentioned F&B colours and yes we could have had more but actually it’s so fresh as it is and our displays can be changed so easily. A stronger pattern on the wallpaper or paint would constrict us and poor Molly was marked down for overwhelming the product. Most importantly they had to merchandise the whole shop – hundreds and hundreds of items had to not just be put out but displayed – far more time consuming than the other shops.

As for me – well the three of us got on so well straight away and we were chatting and laughing all the way through the pitch. I was conscious that I didn’t want to be edited looking stern so grinned away in the gaps in conversation but those editors are professionals and they managed to catch the straight face! They also cut the conversation about colour to me saying that the shop had ‘always been painted white’ – that wasn’t me saying that it had to continue to be but somehow they managed to portray that – that’s fine, we all went into the process knowing that we weren’t in control and I’m so happy that I was involved.

After the show Fran, Dean and I got together for an Insta Live chat which was fun. They are both genuinely lovely people and it was nice to answer a few questions and just relax now that the episode has aired. They both said they might visit again – Dean wants to bring his family and Fran her Mum – that would be fabulous and I’ll certainly show them some great Salisbury hospitality if they do and it would be so good to see them both again.

Another chapter in the history of Casa Fina, as Mary Portas said – a long established business has had an update – hooray!

Follow us on social media for news, events & inspiration

What a perfect day to meet a bunch of friends for

Wow - this ginger jar really makes a statement, it

NEW IN - we love getting deliveries and there were

A touch of the tropics in a lamp. This one is comp

A little look around our displays - contact us if